Around 1872 the Town of Braintree created its own fire department. Fire houses were built on Franklin Street and on Hollis Avenue In 1877 bells were purchased for both of these houses, which became known as the North and South Braintree Fire Houses. 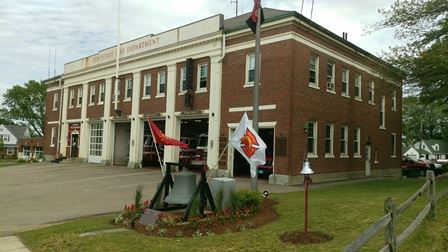 After the First World War Braintree began to modernize its fire department, purchasing new engines and motorizing others. In 1931 the Central Fire Station was built in the Town Center. The neo-federal style building was designed by Charles G. Loring. It is this building, located at 9 Union Place, which is included within the Town Center Historic District. Notably, the bell from the Hollis Avenue Fire House is now mounted in front of the Central Fire Station. The Station is still functional and the bell serves as a memorial to all Braintree firefighters.